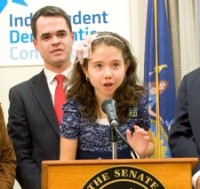 In 2009, New York ranked last in the US for organ donation with only 11 percent of drivers checking the “yes” box on their driver’s license application. David Carlucci and Lauren Shields decided to do something about that to encourage more people to agree to be organ donors in the event of a fatal accident.

Carlucci is a NYS Senator from Rockland County. Lauren Shields is an 11 year old girl, a heart transplant recipient and the person for whom “Lauren’s Law” was named. The New York State Senate passed new organ donation legislation sponsored by Carlucci by 57-0 on Wednesday. The bill now goes on to the NYS Assembly for their vote.

‘€œToday is an extra special day for me,” said Shields. “Without my donor angel, I would not be here today to celebrate my 11th birthday or the passing of Lauren’s Law.’€

The “New York State Organ Donor Awareness and Education Act,” prohibits a driver’s license application from being processed unless the organ donation section is filled out. If passed by the NYS Assembly and approved by the governor, DMV applicants would have to check a box stating ‘€œyes,’€ or ‘€œnot at this time.’€ There currently is an organ donation section on the application, but it is not required to be filled out.

‘€œNew York State took a giant leap in encouraging life saving organ donation,’€ said Carlucci. ‘€œToday is a very special day for Lauren, not just because this legislation that is so personal for her passed the Senate, but because she turns 11 years old today. My gratitude goes out to Lauren Shields and her family for doing so much to bring attention to this very important issue, and I wish her many more birthdays to come.’€

In New York, more than 9,300 people are on the list for organ transplants. However, the state has ranked last in the number of organ donors signed up through their DMV program. By contrast, Colorado signed up 64 percent of new license holders.

Every 11 minutes, a new name is added to the national waiting list for organ donations and 18 people die every day because of the lack of donated organs.