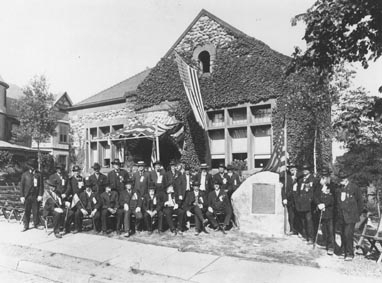 Nyack's Civil War veterans pose with the "Lincoln Boulder" in front of the Nyack Library in June 1908.

April 12, 2011 — 150 years ago today, the opening salvo of the bloodiest war in American history was fired in Charleston Harbor. Nyack’s citizens played a role in that conflict commemorated by the Lincoln Boulder at the Nyack Library, a gift to the village by the children of the village who raised money to pay for the plaque. The monument, located in front of the Nyack Library, has Lincoln’s Gettysburg Address inscribed on it.

A former Confederate prisoner, Union Brigadier General and Nyack resident played a role in the war, advocating for African-Americans during the conflict and speaking out for tolerance afterwards.


Daniel Ullman (sometimes spelled ‘€œUllmann’€) was born in April of 1810 in Delaware, and moved to New York City after graduating Yale University in 1829. He passed the bar in New York and began a law practice at the age of 19.  Also something of a minor politician, he ran for Governor of the State of New York in 1854, gaining 26% of the vote.  When the Civil War began, he volunteered and was made a Colonel in the 78th New York Infantry. In August of 1862 he was captured at Cedar Mountain and became a prisoner of war at Libby Prison.  He was paroled in October, and immediately went to Washington to speak to President Lincoln about an idea he thought would help save the Union, and represent just what our nation was supposed to be all about.

The idea was the inclusion of Black Soldiers ‘€“ free and those freed from bondage ‘€“ as regular members of the Union Army. Not servants, not support or camp followers. Soldiers.  A somewhat radical idea for that time period (despite the numerous African-American soldiers who fought in the Revolutionary War) President Lincoln was at first cool to the idea, concerned with how some of the top brass of his own troops might feel about the concept, AND the fact that his own coup ‘€“ The Emancipation Proclamation ‘€“ was due to become law on January 1, 1863. Too many ‘€œradical’€ ideas at once might break the remaining states of the Union apart.  After that stunning proclamation, Lincoln called Ullman back to D.C. further discuss the idea.

ï»¿In January of 1863, Ullman was promoted to Brigadier General and sent to Louisiana under the command of General Banks, where his orders were to raise five regiments of African-American troops, given the designation of Corps D’Afrique, though commonly nicknamed Ullman’s Brigade.  Despite this victory for Civil Rights, all was not smooth sailing for Daniel Ullman and his troops.  In a letter to General L. Thomas dated May 19th, Ullman would bemoan the lack of respect for his troops ‘€“ the tendency of lower level officers to attempt to use his troops as nothing more than ditch diggers and drudges and those officers’ reluctance to believe African-American troops would be ‘€œcapable’€ under fire – and the overall lack of competence of the white junior officers assigned to his command.

ï»¿Vindication for Ullman and his recruits was just days away ‘€“ the troops would see their first major action on May 27, 1863 when they advanced over open ground in the face of devastating artillery fire.  Ullman’s Brigade, made up almost entirely of men born into enslavement, desperate for the freedom our Constitution promised all men, stormed the Confederates at a place on the Louisiana shore of the Mississippi River ironically named PORT HUDSON!  They would not win this military battle.  Many of the soldiers desperate for their freedom found their freedom that day only through the boundaries of death. The battle they won, however, was mental and moral. General Banks would write in his official report of the Battle of Port Hudson that: ‘€œWhatever doubt may have existed heretofore as to the efficiency of organizations of this character, the history of this day proves’€¦in this class of troops effective supporters and defenders.’€  Another ‘€œcherished’€ myth ‘€“ that African-Americans could not effectively fight as a unit ‘€“ was laid to rest.  For really, who had more of a stake in the outcome of this conflict than men for whom victory meant liberty and defeat continued bondage?  Amazingly, the display of courage shown by the Corps D’Afrique in the Battle of Port Hudson actually spurred more enslaved men to escape their masters and join the Union Army.

ï»¿Ullman’s Brigade was officially renamed ‘€œThe United States Colored Troops’€ and served with distinction through the seige of Mobile in early 1865.  However, in February of 1865, Ullman was detached from his command and sent to New Orleans for ‘rest.” For at heart, Ullman was a thinker and advocate, not a warrior.  The stress of a command constantly plagued with prejudicial suspicion and distrust, and the constant uphill battle for equal treatment had worn him down.  By the spring of 1865 he had developed a serious alcohol problem and was mercifully taken off the front lines, and out of the command structure he’d had to constantly buck for two bloody years.  He was mustered out in August of 1865 and given the rank of Major General.

ï»¿After the war, he retired to but Nyack-on-Hudson, spending the Reconstruction years in literary and scientific study. He was outspoken on the subject of tolerance and asserting that ‘€œequality of education and universal suffrage’€ was the right of all citizens of this country and would be the only way to heal the South.

Unfortunately, his dreams of equality and suffrage would not bear fruit in the South for almost a century.  Daniel Ullman ‘€“ Lawyer, Statesman, Scholar, General and Civil Rights Pioneer ‘€“ died peacefully at his home in Nyack on  September 20, 1892 at the age of 82.  He is buried on the slopes of Oak Hill Cemetery in view of his beloved Hudson. An adopted son of Nyack, perhaps, but so welcome in the diverse tapestry that is our history. Heroes, real heroes, are in short supply in any century, and I’m proud to claim this hero as one of ‘€œours.’€

The Friends of the Nyacks will be conducting one of their semi-annual walking tours of the Oak Hill Cemetery on Sunday, May 1st at 2pm.  Meet at the Main Gate of Oak Hill Cemetary on US 9W, the donation is $5.  Take a walk through the magnificent burial grounds and offer your respects to General Ullman’s grave, along with the other celebrities, authors, artists and politicians making up Nyack’s ‘€œpermanent’€ population.  For more information, the Friends can be reached at 845-358-7910 or www.friendsofthenyacks.org.