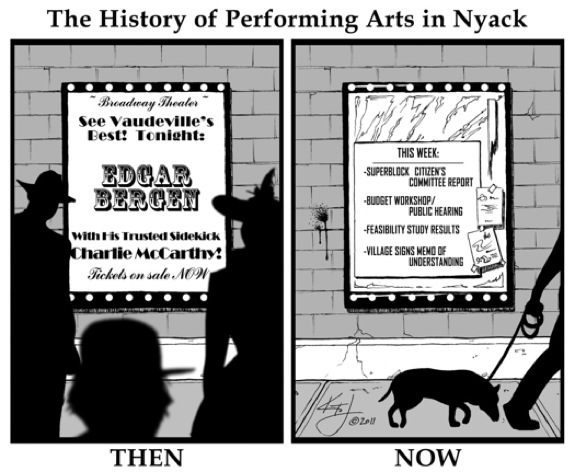 This week Nyack’s Village Board voted 4-1 to sign a Memorandum of Understanding with Riverspace. The agreement calls for sending out an RFEI (Request For Expression of Interest) to solicit developers and their ideas for redevelopment of a Superblock site in downtown Nyack. Riverspace will raise $200,000 to pay for this phase of the project which will produce a plan that will include a non-profit cultural arts component. The village intends to solicit responses to the RFEI by July 15. The MOU states that Nyack makes no representations as to any approvals of any proposals that come out of the RFEI process.

This week’s announcement follows the “Downtown Riverspace” design (2008), the completion of the Mayor’s Superblock Citizen’s Committee Report (2009) and the Superblock Feasibility Analysis (2010).

Illustrator Kipp Jarden is a Nyack native with a BFA in animation from Savannah College of Art and Design who has a passion for creating visual art, especially in traditional forms such as hand-drawn animation and illustration. ‘€œIt Takes a Village: Nyack’s Performing Arts, Then And Now‘€ #20110430 Copyright 2011, Kipp Jarden