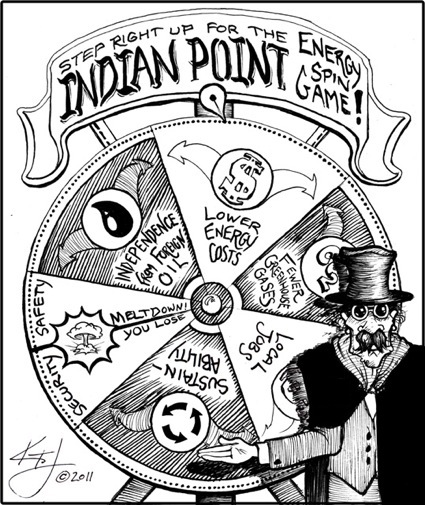 A study by the Nuclear Regulatory Commission says the chance of catastrophic failure at Indian Point reactor 3  in the event of a regional earthquakes is 1 in 10,000, tops in the nation. Which is pretty sobering news for those of us who live only dozens of miles away.

But how risky is that? It’s safer to ride a plane than live next to a nuke plant (1 in 400,000 for airplane accidents) but nowhere near the most dangerous thing most of us do everyday. According to the Reasons.com, your chance of dying in a car accident is 1 in 6500.

Which doesn’t seem to keep most of us out of cars and driving through red lights while talking on cell phones — all behaviors that are much more likely to get us killed than living next to Indian Point.

“But,” you might protest, “if I die in a car accident, it doesn’t potentially risk the lives of the millions of people who live within 40 miles of Indian-Point-On-The-Hudson.” Which is also a very good point.

It all comes down to money. Because regional power companies are now interconnected, our local energy companies could buy the energy we needed from suppliers across the country in the event that Indian Point was shut down temporarily or permanently.

But to gain this statistical feeling of safety by shuttering Indian Point, both the consumer and power companies would have to shoulder additional costs, like laying off local worker layoffs and paying more for electricity that was purchased from elsewhere. And what are the odds of that happening?

Illustrator Kipp Jarden is a Nyack native with a BFA in animation from Savannah College of Art and Design who has a passion for creating visual art, especially in traditional forms such as hand-drawn animation and illustration. ‘€œIt Takes a Village: Indian Point Roulette‘€ #20110422 Copyright 2011, Kipp Jarden