A ghost army of tanks and artillery is set to occupy the Historical Society of Rockland on May 1. It might not fool you — but it was good enough to fool the Germans during World War II.  It’s a story of “smoke & mirrors’€ that was under wraps for 50 years.

In 1944, an army unit of art students, actors, and sound technicians was sent to Europe with rubber tanks, phony artillery, a cache of sound effects on a mission to deceive the enemy. While impersonating many different army units, they also painted and sketched their way across Europe.

This exhibit, which runs from May 1 – Oct 16, features the work of Rockland County Ghost Army artists, Bill Sayles of South Nyack and Ned Harris, of New City. Nationally known luminaries such as Bill Blass and Ellsworth Kelly, Arthur Singer and Art Kane were also part of the Ghost Army.

“Whenever we had  spare time we would draw anything or anyone who was around, bombed out villages, working girls in Paris or just each other,” says Bill Sayles. 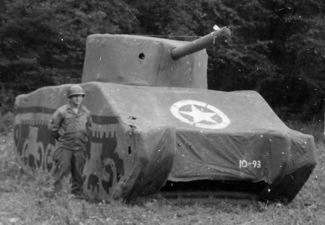 According to the website of the The National Army Security Agency Association, this small army duped the Germans successfully in 21 separate operations during World War II. German soldiers referred to them as the “Phantom Army,” because one moment they were in one place, and the next, they were attacking their flanks or from the rear.

“I grew up listening to my father’s stories about his time in the Army in WWII,” says event curator Liz Sayles. “Like when Bill Blass re-stitched his uniform to make it fit better, or about the dummy tanks they had to inflate in the middle of the night.” Sayles says she took it all for granted until she heard an interview her dad did for “Ghost Army,” a documentary by film maker Rick Beyer.  “Here are a bunch of artists using deception to fight a war who created amazing pieces of art along the way.  The operations were top secret for 50 years after the war, and now the information is available as to how much they actually accomplished without ever firing a shot,” she says.

The Historical Society of Rockland County is located at 20 Zukor Road in New City. Regular exhibit hours are Wed-Sun from 12n-4p. An opening reception is planned for  2p on May 1.

Advertisement. Scroll to continue reading.
In this article:Events, Rockland County