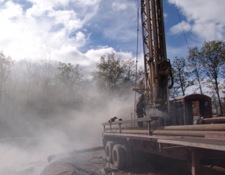 What’s not to like about new technology that offers the promise of local jobs and greater energy independence? Those are some of the arguments in favor of hydro-fracking, a process which makes it economically feasible to extract natural gas by pumping water at high pressures to crack rock formations and release natural gas trapped in small pores and bubbles deep below the surface.

Pro-frackers say it could be an energy source that will decrease our dependency on foreign oil. With many Americans concerned about the safety of nuclear energy after the Japan’s Fukishima partial meltdown and radiation release, a home grown, readily accessible alternative like natural gas seems to good to be true. But maybe that’s because it is.

While the benefits of fracking can’t be denied, there are hidden costs of which many communities are unaware.

In 2009, a spill of fracking fluids in Dimock, PA occurred at a well site operated by Cabot Oil and Gas. The spill, containing potential carcinogens, leaked into a nearby stream killing much of the fish living there. In addition to contaminating Dimock’s wildlife, Cabot was also responsible for contaminating the drinking water of many homes with metals and methane gas that had leaked from their underground wells. In December of 2010, Cabot finally agreed to a settlement of $4.1 million to the residents affected by the water contamination. However, many of these families are not accepting this settlement money as it does not begin to cover their actual losses.

There is no denying that natural gas is an untapped resource. But what is less clear is whether the short term gain of cheap energy is worth the very real risk of depleting aquifers and contaminating drinking sources in upstate New York and rural Pennsylvania.

Editor’s Note: Gasland, an Academy Award winning documentary about communities impacted by the hydrofracking, will be screened at FOR (the Fellowship of Reconciliation) in Upper Nyack on on Sunday, April 17.

Becca Blazak is a senior at Ithaca College majoring in Culture and Communication.