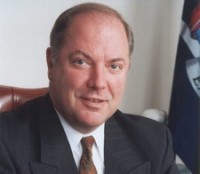 New City, March 15 — Rockland County Executive. C. Scott Vanderhoefï»¿ told the County Legislature that elected officials have to “find ways to rebuild the structure of government, renew our commitment to it, and reconnect with the people we are here to serve.” Vanderhoef reviewed the State Of The County for legislators on Tuesday.

Rockland County faces a 2001 operating deficit as much as $5 million. On Jan 11, NYS Comptroller Thomas DiNapoli’s office notified the county that they would be conducting an audit of the county’s finances. Vanderhoef blamed many of the county’s difficulties on NY State government and noted that the county’s bond rating is improving. “Even as dysfunctional Albany continues to force the bitter taste of poor financial  planning and management down the throats of increasingly vulnerable county governments, I am proud to say that Rockland has weathered this financial storm far better than many other counties across New York.” Vanderhoef says Moody’s gave Rockland its highest rating for short-term borrowing earlier this month.

While heartened by the recent news, county legislators remained cautious about the state of Rockland’s finances. “While I do share his sense of optimism about where the county is heading, in my view we must assess the results of the State Comptroller’s office,” says Rockland County Legislator Ed Day.

First elected in 1994, this was Vanderhoef’s 18th State of the County Address. Some of the other issues covered included: