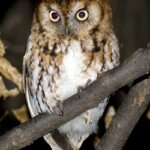 Last Friday night I accompanied four children under the age of 12 on a dark cold February evening to search for things that go hoot in the night.

Accompanied by a neighbors’ intrepid 11 year old daughter, my three kids and I ventured to Stony Point Battlefield for a Rockland County Audubon Society ‘€œowl prowl.’€  Although the temperature hovered in the low 20’s, the sky was clear and, after weeks of ice-bound stasis, the call of the outdoors ‘€“ and the owls ‘€“ was irresistible.  More than thirty adults also heeded that call and met in the parking lot, bundled and binocular-ed for an hour long walk.

The ‘€œowl prowl’€ lived up to its name.   As the group walked quietly along the moon-lit road, the coordinators played a recorded screech owl call.  As the resident owls responded, a bright light was turned on for a short period of time to illuminate them.  The initially silent woods were soon filled with swooping, small forms, and the calls of the live owls filtered through the trees.  The owls perched on nearby branches, looking down on the many faces peering curiously back at them, and then flew off into the night, dark shadows on the snow.

The search for great horned owls was less successful, and, when the recording stopped working because of the cold, the party turned back to the parking lot.  As I drove my tired, now-squabbling children home, I reflected again how privileged I am to live in Rockland County, to have shared these woods with its creatures even in the depth of this everlasting winter, and to have witnessed the mesmerized face of my six year old, silenced and stilled by the slow beat of an owl’s wings.