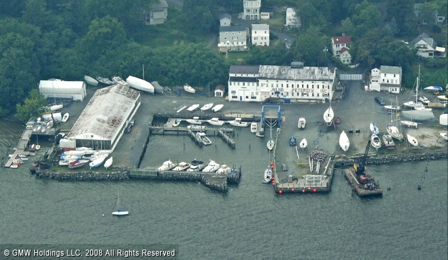 During the 2009 Upper Nyack public debate about a possible sale of Petersen’s Boatyard to residential developers, one of the neighbor’s worst fears was that the property would be turned into condos. A new buyer with a marina background was subsequently found who will be turning the 200 year old property into a valet parking lot for boats.

Sound Marine, the marine construction and salvage company which bought the boatyard last October, wants to add another chapter to the storied history of Petersen’s by offering an “in and out” valet service for boat owners. Sound Marine owner Ken Graefe plans to build racks to accommodate 60 boats to make the most of the limited space at the three-acre site. With as little as 30 minutes advanced notice during the marina’s regular business hours, Graefe’s says his crew will have a boat in the water and ready to launch when its owner arrives.

“It’s less wear and tear on the boat,” says Graefe. “Owners won’t need to worry about bottom painting and corrosion because their boats aren’t sitting in the water all of the time.” Graefe says it’s ideal for boating enthusiasts who want to get the most from their time on the river. “For someone who only gets to go out a maximum of eight times all summer, they won’t have to waste time prepping.” Graefe adds boat owners can sleep better at night knowing that their boat will be out of the water and out of harm’s way if a big storm hits the Lower Hudson Valley.

Although in and out services are popular throughout the country, Graefe says Petersen’s is the only boatyard in the Hudson Valley that offers this service. After construction is complete Petersen’s new racks and the 21 existing slips will give the yard a 100 boat storage capacity.

This Spring, Graefe and General Manager Gary Prunotto are planning to add transient docks at the Northeast corner of the boatyard. “It will be a place where Hudson River boaters can tie up for the night for a small fee, come ashore, shower and catch up on their laundry,” Prunotto says. Or just stop for a while and enjoy the view. “The view from Petersen’s is one of the best views in the area with Hook Mountain to the North and the Tappan Zee Bridge to the South,” Graefe says.

Graefe and his father, Ken Graefe Sr, own Sound Marine, a company that specializes in building fixed and floating docks, bulkheads and providing and marine salvage operations. Sound Marine purchased Petersen’s from the Beneville family whose grandfather Craig Carle bought the boatyard from the Julius Petersen estate in 1948.

The Petersen’s name dates back to 1898 but the property has been in continuous use as a boatyard since the 18th century. The boatyard, located where Van Houten Street meets the river in Upper Nyack, was originally called Tallman’s Dock after Abraham Tallman bought the land in the 1793. Over the centuries the yard has built boats as varied as schooners, steamers as submarine chasers as well as luxury yachts. During World War II, Petersen’s employed as many as 300 people building boats for the U.S. Navy.

Since boat building ceased more than 60 years ago, Petersen’s has been used as a marine storage and repair facility. By the time Graefe took over the business, the boatyard was badly in need of some maintenance and TLC. “If we didn’t have the construction business, this wouldn’t make sense,” says Ken’s wife and Accounts Manager, Kim Graefe. “You need someone with a passion for the boating business and the construction resources to make the needed repairs and improvements,”she says. ‘€œFortunately, it was a perfect match.”