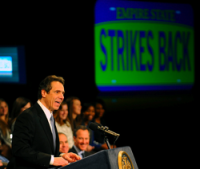 Albany, Jan 5 — Striking a balance between the state’s desperate financial situation and the its rich history, New York Governor Andrew Cuomo gave his first State of The State address on Wednesday. “We are at a time of crisis that has been created by national economic pressures, out of control state government costs and a dysfunctional political system that has lost the trust of its people,” Cuomo said. “And yet, New York’s assets, legacy and tenacity suggest we can turn this crisis into an opportunity to fundamentally remake our state into the progressive capital of the nation.”

Cuomo spoke at Empire State Plaza Convention Center, instead of the traditional NYS Assembly chamber, inviting about 1,000 members of the public to offset the chilly reception expected from senators and assemblyman.

Describing his plan as a “roadmap for transformation,” Cuomo said these initiatives will “allow New York State to become the Empire State in both name and spirit again.” Cuomo called on legislators to join him in enacting his plans. “The actions it calls for are bold and they must be acted upon,” he said.

The full transcript of the governor’s State of The State speech is available at www.governor.ny.gov.