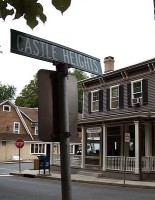 Upper Nyack, Dec 14 — Upper Nyack’s Village Board presented a path to independence from Clarkstown this week, offering the hope of lower taxes, greater local autonomy, improved police service and a new local park area in the future town-village. But the trustees didn’t explain how they would get approval from 2/3 of the Rockland Legislature, a majority of town voters and buy-in from the other villages in Clarkstown to make that dream a reality.

Trustee Jeff Hindin detailed Upper Nyack’s current relationship with Clarkstown to about 75 people at the Upper Nyack Elementary School on Tuesday night. Village officials feel that Upper Nyack isn’t getting sufficient value for the $2.4 million it pays into Clarkstown’s general fund. Although the village represents about 2.1 percent of the population, it accounts for 2.3 percent of the general fund.  Hindin says about $900,000 is spent on police coverage for the village. The remainder seems to fund Clarkstown’s parks and recreation facilities, he said.

The members of the village board are irked by the improvements made to unincorporated areas in Clarkstown because Upper Nyack has been repeatedly turned down for similar requests. “What about money for us?” asked Trustee James Sarna. “Every time we ask, we are told no.”

The meeting also included a brief discussion of dissolving the village. Changing to an unincorporated hamlet would eliminate the village tax, close village hall, disband the DPW and dismiss the trustees. But it would also cede zoning control and decision making to Clarkstown, something the community is loathe to do. It was unclear how much actually might be saved as unincorporated areas of Clarkstown are taxed at a higher rate than the villages.

Although a lot of time was spent on the possible benefits of becoming a town-village, very little time was spent on the political strategy required to make it so. In 2004, Clarkstown residents rejected a plan to buy Petersen’s Boatyard, which, theoretically, offered a benefit to everyone in Clarkstown. Town-village advocates didn’t explain why they thought Clarkstown’s voters would approve an Upper Nyack secession if it meant higher town taxes. The initiative would also need to be approved by 2/3 of the Rockland legislature.

Despite Hindin’s preparation and thoroughness in building the case for indepdenence, skeptics questioned many of his assumptions. Residents couldn’t see how being a town-village would raise property values as Upper Nyack would be losing access to Clarkstown’s parks and swimming facilities.

The trustees’ claim that Upper Nyack is missing out on benefits the Clarkstown hamlets receive was challenged by the town’s representative at the meeting . “The majority of the New City improvements were paid through state grants,” said Daniel Kraushaar, Clarkstown Deputy Attorney. Kraushaar says that many of the “slights” that village officials feel are dictated by New York State law and out of the hands of town officials. “I can assure you that you have a town board that is receptive to working with the village,” he said.

Kraushaar also doubted that the town-village plan would succeed, saying that it was both politically and financially impossible. “It will increase, not decrease, taxes.” Kraushaar also said that one of the options Hindin suggested to replace Clarkstown Police with coverage by the County Sheriff was previously found to be unconstitutional when it was tried in Sloatsburg. Officials from other municipalities have expressed doubts about replacing Clarkstown police and adding dispatch staff  for significantly less than the $900,000 that Upper Nyack now pays.

Despite the obstacles, there was strong support for trying something new. “Reducing taxes is the bottom line,” said Jim Cason, who owns 11.9 acres on North Broadway and pays over $52,000 a year in taxes. Cason says he has to borrow money every year to pay his taxes. He offered to sell his property to the new town-village to be used as a future community park should the dream of a town-village ever become a reality.