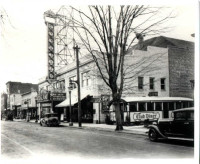 The recent public forum regarding the development of the ‘€œSuper Block‘€ had me thinking about Nyack’s long history with theaters ‘€“ Opera, Vaudeville, Equity Dramas and Musicals, avant-garde Performance Art, mainstream Film Palaces and Community Theaters. Now, aside from being a realtor as many know, I’m also an Equity Actor, so of course I would love for Nyack to continue to have a professional theater where I could work and even walk home from! We’ve had a number of them in the past, and I’d like to show you a few’€¦

ROCKLAND THEATER: This movie palace was located in the heart of town and was one of my family’s favorite movie theaters when I was quite young ‘€“ my mother loved ‘€œThe Sound of Music’€ so much that we saw it at this theater a half-a-dozen times in the movie’s initial run.

Built in 1927-28, the theater had a whopping 1638 seats! I still vaguely remember the (to my child’s eyes) flashing marquee with lots and lots of light bulbs and a huge (again, to my eyes) chandelier in the lobby, and it was vaguely ‘€œSpanish Villa’€ in feel ‘€“ to my child’s mind it was incredibly exotic, and second only to that cathedral of movie theaters in the city, Radio City Music Hall. It supposedly housed an 8-rank Wurlitzer organ, and my Mom recalls a number of excellent organists over the years. Growing up, her family always had a vacation home in Rockland Lake (more on the lost village of Rockland Lake in a latter post) and this was the theater that my Mom and her brother Bill would go to for matinees.

If the ‘€œClub Diner’€ in the photo looks familiar to you ‘€“ 10 points. That railroad car diner would be moved to the corner of New Street and Park Street where it would again be a diner, and then eventually the current (and very popular) Thai House Restaurant.

The theater closed it’s doors for good in 1967, and was demolished in 1978 ‘€“ for a while the empty lot was used for parking, before it became what it is today ‘€“ The Victoria Mews Condominiums across from the Runcible Spoon bakery/cafe.

BROADWAY THEATER/TAPPAN ZEE PLAYHOUSE: This theater began it’s life in 1835 as a warehouse for the building of sleighs and carriages, by 1868 it was Doersch Brothers Grocery, then later a Real Estate Office. After sitting for several years as ‘€œa hole in the ground’€ (see, it happened before!) in 1911, what was left of the original was converted to a theater by adding a lobby and box office in the front and a stage/backstage/fly area in the rear. The venue was used both for live performances ‘€“ vaudeville at first ‘€“ and movie screenings. Initially, it housed 1114 seats. It closed it’s doors in 1931 and remained vacant until 1958 when it re-opened as all live theater summer-stock venue of Broadway plays and musicals, changing it’s name to The Tappan Zee Playhouse.

Over the years many stars of stage and screen would appear at the Tappan Zee Playhouse including Edgar Bergen, Julie Harris, Joan Fontaine, Gloria Swanson, and of course, Nyack’s own Helen Hayes. My mom recalls seeing Liza Minellia and Elliot Gould there, and I attended a production of ‘€œGodspell’€ during it’s tumultuous last years in the 1970’€²s when it would open, close for a while, open for a production or two, then close again ‘€“ a fire in 1976 signaled the last time it would be open as a theater. Sadly, I remember far less of this theater’s interior than I do of the Rockland Theater above. What I do remember from the 1970’€²s was a heavy musty smell and an overall feeling of depression being in the building. Time did not treat this theater well. A grassroots effort to save the theater started in the late 70s/early 80s and I performed in an number of benefits to ‘€œSave the Tappan Zee Playhouse’€ ‘€“ in September 1989, the theater’s name was officially changed to ‘€œThe Helen Hayes Theater’€ in hopes more money would come in under that name. Sadly, the building proved too much to deal with, and since the goal of the restoration group was to save live professional theater in Nyack, not become a preservation society, the building was abandoned to its’ fate and the Cinema East theater on Main Street was purchased to become the Helen Hayes Performing Arts Center. That building now houses ‘€œRiverspace’€ but the future of theater in the space is in doubt ‘€“ hence the meeting which I discussed at the start of this post.

In 2004, the Tappan Zee Playhouse building was brought down before it fell down ‘€“ the replacement building had to at least approximate the facade of the original, as the original had been added to the National Register of Historic Places. The new facade does indeed admirably echo the old ‘€“ housing for Fire and EMS volunteers takes up the upper floors and a Gourmet Market opened on the main floor only to close its’ doors in less than 6 months. Sadly, the main floor space is now empty again.

So, sadly, the future of live professional theater remains in doubt. The Nyack Opera House, Tappan Zee Playhouse, Rockland Theater, and Helen Hayes Performing Arts Center are all no more. Riverspace struggles to survive but has only been utilized a few times this year (I performed there in the Fall with Neil Berg and the rest of the ‘€œ100 Years of Broadway’€ reunion cast). In the center of town, avante-garde theater does take place on occassion in a small ‘€œblack-box’€ theater above the old Woolworth building, but that is currently all. The Actor’s Equity Union feels that Nyack can support a 350 seat live theater and make it viable year-round. I hope some of the ideas that are being kicked about actually include a SMALLER sized theater with less seats so that perhaps we can maintain a continued live professional theater presence in the village.

Until that time, although as a professional I cannot work there, we CAN satisfy ourselves with our theatrical stalwart ELMWOOD PLAYHOUSE. Around since 1947 and located on Park Street in downtown Nyack since 1958, this non-professional community theater continues to perform exceptional dramas, musicals and original works season after season. Mark my words, don’t let the phrase ‘€œCommunity Theater’€ frighten you when it comes to Elmwood ‘€“ these are some of the finest non-pro productions in the entire country and their excellent reputation is well-deserved ‘€“ they just deserve some company in town!

The “Palace in Nyack” music video about the Rockland Theatre was produced by composer and Nyack native, John Babcock.