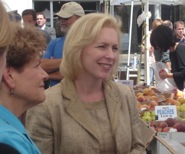 New York Senator Kirsten Gillibrand finished 2010 on a high note, impressing critics with her work helping to pass “Don’t Ask Don’t Tell” and a bill to provide health care and economic support to 9/11 first responders. The New York Times highlighted these efforts with a Page 1 story on Wed 12/23. The Times writes:

Once derided as an accidental senator, lampooned for her verbosity and threatened with many challengers who openly doubted her abilities, a succinct, passionate and effective Senator Gillibrand has made her presence felt in the final days of this Congress.

Her efforts have won grudging admiration from critics, adulation from national liberals and gay rights groups, and accolades from New York politicians across the political spectrum, including Mayor Michael R. Bloomberg, who once shopped for potential candidates to oust her.

Even her relentlessness, which once drew mockery, is now earning the highest compliment of all: professional jealousy from her more senior colleagues.

Gillibrand visited Nyack’s Farmer’s Market on August 26 as part of a 2010 campaign swing.