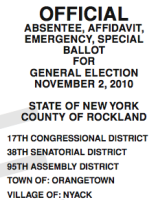 Click on image above to see a sample ballot for Nyack voters.

Nyack, Nov 2 — New Yorkers go to the polls today to cast ballots in state and U.S races. Polls are open from 6a to 9p. Find our where to vote here.

In Nyack, Trustees Louise Parker and Steve Knowlton are running unopposed for the Village Board.

Republican and Tea Party favorite Carl Paladino and Democrat Andrew Cuomo are the leading contenders in a field of seven gubernatorial candidates. Other NYS races on the ballot include Attorney General, and Justices for the Supreme Court. Democrats Charles Schumer (vs. Republican Jay Townsend) and Kirsten Gillibrand (vs. Republican Joseph DioGuardi) will defend their seats in the U.S. Senate and Congressman Eliot Engle (D) is running for re-election against Anthony Mele (R) and Conservative Party nominee York Kleinhandler.

To see a sample ballot for Nyack, NY, click here. To learn where the winners will drink to their success and the losers will drown their sorrows after the polls close, read the Guide To Election Night Parties at CityHallNews.com

Advertisement. Scroll to continue reading.
In this article:Events, Politics/Elections