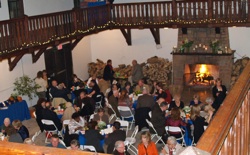 Keep Rockland Beautiful’s Annual Awards Gala on November 6, 2010 gave 150 people the chance to get inside the historic Bath House building at Nyack Beach State Park. This impressive stone building once housed the quarry’s power plant, later served as a community facility for the park, and has been virtually vacant for decades.

Keep Rockland Beautiful has brought numerous volunteer crews to clean and polish the inside, including the 200 foot balcony made of American chestnut wood and arranged for free professional services, such as powerwashing the floor by Chris Savoury of Spotless Powerwashing.

The goal? Re-open the building for community events such as the KRB Awards Gala, which featured an art exhibit and auction by the group Artists in the Parks, as well as live bluegrass music by the Hook Mountain Boys and donated beer from Defiant Brewery in Pearl River. The focus of the event is to honor outstanding individuals who have contributed to the beautification of Rockland County.