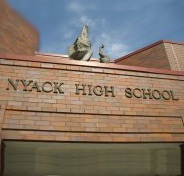 Nyack, November 14 — Nyack’s Board of Education modified its open campus rules for 9th and 10th graders last week in a contentious 4-1 vote, completing a rocky process that started in July. The new rules rescind lunch privileges for freshman and allow 10th graders with good grades and attendance to leave campus with their parent’s written permission. The school has budgeted $167,000 for security guards and additional cameras to enforce the policy.

Board member Tom LaColla voted no both last week and last July. ‘€Subverting best practices has lead to anger, confusion and apologies from the board. It has also left the community to question the board’s motives and overall ability to function as a cohesive unit,’€ he said. ‘€œWe cannot solve social problems with political solutions. Cutting and failure are guidance issues ‘€“ not a lunchtime free time issue.’€ LaColla said the restrictive policies adopted by the board will only drive bad behaviors like drugs, alcohol abuse and sexual promiscuity into hiding and not address the underlying issues. ‘€œHow far would $167,000 go to improving the lives of our kids and their families if we invested in more health and wellness programs than cameras and televisions?’€ LaColla said that if safety were really the board’s primary concern, prohibiting students from driving off campus during school hours and providing universal busing to all students would do more for student safety than closing the campus.

‘€œThe idea that someone has to decide which 10th grader can come and go freely and which has to stay put is clunky and I think unnecessary,’€ said Nyack parent Elizabeth Sayles. She thinks it’s good that a decision has finally been made as the board has more important items on its plate. ‘€œThe bigger fish to fry at NHS is block scheduling. It dwarfs the open campus issue,’€ she says.

Students are less supportive of the new rules. ‘€œThe open campus is something that makes NHS unique. I think it speaks to the fact that our administrators trust our students,’€ said Nyack senior Claire Masters. She said that even with the new security guard and the cameras, the revised plan is unnecessary and will prove impossible to enforce on the high school’s large campus. ‘€œI can not fathom how the policy will be policed,’€ she said. Masters believes that ending 30+ years of open campus for all students indicates a change in how the schools are being run. ‘€œThis new policy sounds great. It serves as incentive for underclassmen to be in good standing. [But] the latest policy change speaks to a shift in the way the administration is being run.’€

Many parents agree they see a change in philosophy at Nyack schools. ‘€œ’Some people seem to see the world as a dangerous place, and it is our job to protect our children. Others see our community as a basically safe place which our children must learn to navigate competently in order to avoid the dangers they will inevitably encounter,’€ says one high school parent. ‘€œSometimes I think this is an example of the cultural differences in our community and a leadership who did not take the time to allow for the discussion that might have bridged the gaps and found a consensus.’€

The revised plan permits 10th graders in good academic standing with good attendance records to leave campus. Juniors and seniors can continue to leave the school without any restrictions. Schools spokesperson Gail Fleur said the criteria for which sophomores will be allowed to go to lunch has yet to be decided. ‘€œA committee composed of staff, parents and students will be created to detail a recommendation for the criteria to be used to allow a 10th graders off the campus,’€ Fleur said.

Some parents think that bad behavior in the schools isn’t limited to students. ‘€œThe manner in which the board has conducted itself since its July reorganization, despite its apologies, has damaged its credibility,’€ said NHS parent Mark Hussey. ‘€œThey have continually shifted their rationale for closing the campus since July,’€ he said. ‘€œI think that the new policy leaves many unanswered questions about very serious issues at the high school. Although it has been widely welcomed by the staff and principal they should be aware of the rifts this process has opened within the community of concerned parents in Nyack,’€ he said.