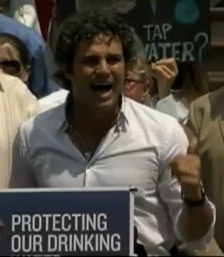 Ruffalo is the spokesperson for Frackaction, an organization that successfully lobbied the NYS Senate to pass a temporary moratorium on gas drilling. ‘€œDavid Carlucci will fight to stop risky gas drilling and protect the health and safety of our kids,” says Ruffalo.

“It is my belief that we do not know enough about either side of this issue to allow widespread hydro-fracking in the Marcellus Shale and the Utica Shale formations to begin,” wrote Carlucci in an opinion piece last July. “We need to thoroughly investigate and understand reports of ground water and nearby stream contamination as well as the health impact to local residents before we jump into this process, or we may end up with an environmental disaster on our hands. Such a disaster would make any economic gain offered by the gas companies seem small by comparison.”

Hydrofracking uses is a process that injects a mix of water and hundreds of chemicals under high pressure into wells to create fissures and to release trapped natural gas. Environmentalists have expressed concern that the chemical mix is toxic and may poison drinking water supplies in areas where fracking is employed.

‘€œI’ve met people from Pennsylvania who are dealing with the consequences of fracking,” says Ruffalo. “They trusted the gas industry when they said this technology was safe, clean, and secure. And now many families can’t drink their water, their kids are getting sick, and their homes have dropped in value. Time is of the essence, we must learn from the mistakes of other states and keep our water safe,’€ says Ruffalo.

The Independent Oil & Gas Association of New York, and industry group which favors hydrofracking, says permit fees from drilling could generate as much as $10.7 million in revenue for New York State. “New York’s oil and gas industry has an outstanding record of safety and environmental stewardship in New York, and has consistently maintained that the state Department of Environmental Conservation should be allowed to complete its work on new regulations governing natural gas exploration in the state,” they wrote in an August 2010 blog post.

An FAQ for the documentary movie Gasland says the 2005 the Bush/ Cheney Energy Bill created the “Halliburton Loophole” granting an exemption to companies who drill for natural gas drilling by exempting them from disclosing the chemicals used in hydraulic fracturing.