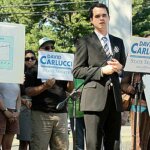 Clarkstown Clerk David Carlucci will forego his annual pay increase, he reports. Citing the tough economic times in his town, which includes parts of Nyack and the Village of Upper Nyack, Carlucci said that he did not think that a 2.5 percent raise was appropriate at this time.

Carlucci’s declining his own pay raise contrasts sharply with C. Scott Vanderhoef, his State Senate opponent’s recent actions. As County Executive, Vanderhoef campaigned for and got a raise of  12.5 percent just 10 months ago soon after his reelection. He did this while county employees and taxpayers were being asked to make hard financial sacrifices. Unlike Carlucci, Vanderhoef did not consider the shared burden between his office and that off his constituency during this deep, 4-year deep recession. Even a symbolic demonstration that he shares in the pain of taxpayers would have been appreciated.

And Carlucci’s declining a pay raise may be more than just a campaign tactic in this upcoming race. He writes:

In this economic crisis, I cannot in good conscience accept even a 2.5 percent increase while asking staff and constituents to tighten their belts. Thousands of Rockland County residents are losing their jobs, losing their benefits, starting over mid-career, or leaving all together. During these dire fiscal times, every dollar must be justified so that public funds truly benefit constituents.
[…]
Shared sacrifice means just that. We in government cannot justify asking seniors and hard-working families to do more with less, while other elected officials continue to reward themselves at the taxpayer’s expense.

Soon after Vanderhoef got his $17,000 pay increase he began to eye other offices instead of attending to his suffering County. The day after he began his new term as County Executive, he publicly stated his interest in running for State Comptroller. Since, he has toyed with the idea of running for Senate against Kirsten Gillibrand, and now he’s full-time on the campaign trail for State Senate.