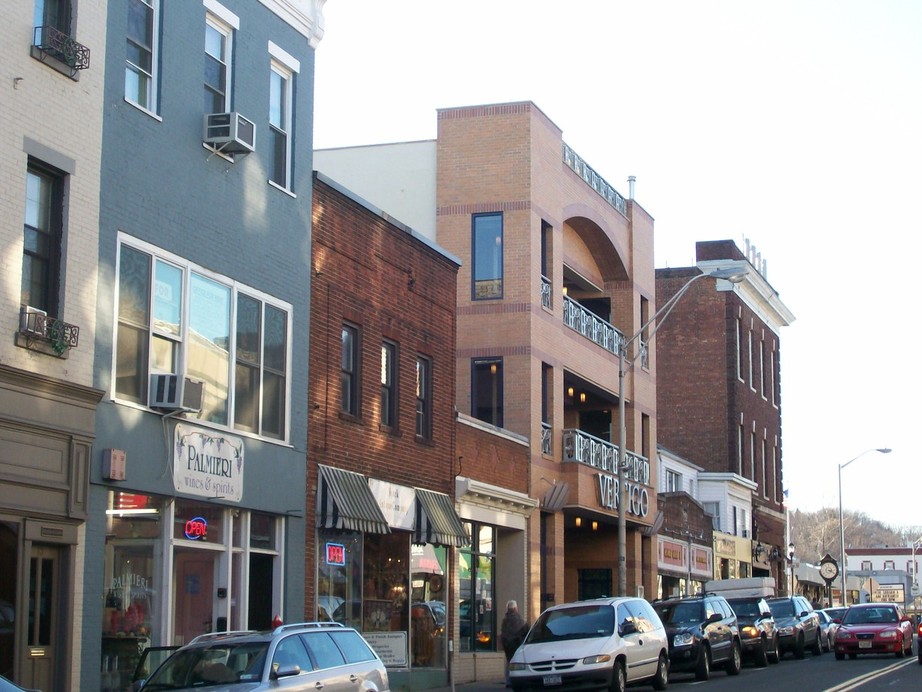 At last month’s meeting on the feasibility study to redevelop Nyack’s downtown, the recurring phrase I kept hearing was ‘€œNyack has the DNA of Art.’€

Two thoughts struck me right away, Art who? And; is there a blue dress somewhere soon to be introduced as evidence of this claim.

There continues to be a disconnect between the perception of Nyack and the reality of Nyack. This fact is made clear by the several past attempts to reinvent Nyack as some sort of arts community, something it clearly never was, evidenced by the unapologetic boondoggles these schemes were finally revealed to be. Artists and antique dealers move to places where there is cheap rent and a low tax burden so in a way it should be a lesson in becareful what you wish for. Consider the history of WestBeth, the East Village and Soho, in the beginning these were all places no-one wanted to live, not some sentimental fantasy of an artist community.

OK we had Edward Hopper but he left as soon as he could manage.  Helen Hayes’ most prominent local legacy has all but vanished behind a faÃ§ade of brick and arbor vitae imposed by selfish interests who’s personal privacy and physical security was apparently more important than the public amenity, Pretty Penny, Mrs. MacArthur so obviously cherished.

The arts center now being offered up in true not so slick used car sales fashion as; the Luxury edition, the Mid Sized and the Economy Class, is a sales pitch once again aimed at committing Nyack to a brand without first knowing the real costs.  Costs in time, the financial cost and the cost to our society, which will once again be balkanized by the disparate, interests each claiming, ‘€œyou are either with us or against us.’€

If we were really interested in a performing Arts Center, where was Elmwood Playhouse or Main Street Arts represented as evidence of this much anticipated feasibility?

Whatever they are paying these consultants it’s way too much. The presentation brought nothing  new to those of us in the audience familiar with the long history of  Nyack’s ongoing struggle for identity who have worked so hard on the various exhaustive studies and processes over the last ten or more years. Investments which were all largely ignored by one feckless administration after another. So far, the only people benefiting from all of this planning largess are the planners.

Dan Gottfried and Denise Cohen are both exactly right in their different statements: it is past time to really do something.

I, personally, would be much less skeptical had this group spent less time selling me on how many seats they have provided for Art in the past and more time considering our Comprehensive Plan, specifically the Downtown Committee’s recommendations which years ago called for Nyack to reconnect the street grid displaced by the ‘€œsuperblock,’€  the vestigial HUD project element that actually limits growth by providing only one faÃ§ade of the entire building with usable frontage for shops. It segregates the village with a sort of DMZ of parking between Main Street shopping and dining and the affordable housing of Depew Ave. with a traffic and social dead end if you will at Artopee Way and Franklin St.

Lets forget about this guy Art for a moment and re-examine the wisdom in re-establishing the traditional street grid that HUD paved over in the seventies.

If we were to rebuild all these streets through the existing ‘€œsuperblock,’€ not jut east and west but north and south, return us to the small block mixed use of shops with apartments and or offices above, with Bridge St and Park St continuing south and both Church St and Burd St. continuing west we then have essentially cubed the available resources of a traditional River Village with shops and apartments on traditional streets with the familiar amenities these bring to our lives, corners, and sidewalks to congregate on, on street parking not acres of asphalt devoid of character. Lets consider the BFJ report and think about traffic flow as a sort of ‘€œconvection plan’€ utilizing more one-way streets to enhance traffic flow and help direct cars to available and more convenient on street parking. Lets use the Muni-Meters for what they were designed, effective parking management and not  just expensively inconveneint parking meters.

Lets ‘€œdaylight’€ the stream again make it a public amenity and in doing this let the new streets and storm water infrastructure beneath them in this newly restored and expanded street grid  help mitigate the flooding we have seen recently.

I still want to meet the engineering genius who thought burying a stream of this size on a slope like Nyack’s was a good idea.

Lets address the issue parking in Nyack in the broader discussion of access to Nyack while we are at the same time improving our transportation infrastructure. Except for one person in the audience who complained that even her friends won’t come to see her anymore because parking in Nyack is so ‘€œoutrageous ‘€œ(I would suggest she try to make some new friends) most people realize that the parking issue is largely mythic though still a pain at some times of the day and is a manageable problem that doesn’t necessarily need an expensive structural solution, but more education and better management.

We have to have better more convenient public transportation for ourselves and for our guests and visitors. The waterfront is one obviously neglected ‘€œgateway’€ to Nyack but we should also not ignore other options. We should welcome a faster and more convenient transit service for Nyack and the rest of the county. Interesting to note that Nyack currently holds the record in Rockland County for DUI arrests (I will leave the obvious connection between these two issues, parking and drinking, up to you). We’d all sleep a lot better at night if the drunks could take a bus home. I will suggest we closely examine the questionable judgment of predicating the financial well being of our community upon selling liquor by the ounce, the only business model which apparently can support the hugely inflated rents,  a remnant of an official policy of ‘€œlaisez bon temps roulez’€ as a financial management tool. Don’t we have something better to offer?

Lets let Art fend for himself for awhile. From what I’ve heard he needs to starve for awhile to be any real worth in the first place. Lets work with what we have here now, including the endeavors which seem to have been able to find a workable balance in town like Main St, Elmwood and Rivertown Film. These operations understand their market and have not over reached their base.

Lets first look to what we still have, and how we can reclaim what it was we have lost and try and figure out for ourselves, not with another sales pitch, but finally implement what we already know by virtue of the efforts of so many good people who regard Nyack as not just a cash cow for developers but where we live and how we live and how we make our living.

Community supported development, not the other way around.