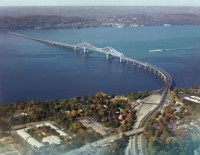 Neither Democrat Andrew Cuomo nor Republican Carl Paladino is too specific about how they would change NYS transportation policies if they became governor, according to the Tri-State Transportation Campaign blog.