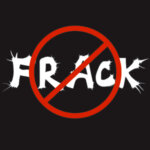 A battle is brewing between the energy industry and environmentalists concerning the dangers of removing natural gas from the shale using a process called hydrofracking. There have been reports of exploding houses, tainted water supplies, and serious health problems as a result of the process, which injects toxic chemicals into rock about a mile below the surface. The toxic brine created by the process can seep into underground and ground-level water supplies. As we don’t even know what compounds the energy industry is using to extract methane gas, we can only guess as to the long term ramifications of this process.

The Marcellus Shale, which reaches beneath the southern tier of New York and into Pennsylvania, Ohio, and West Virginia is one of the largest fossil-fuel reserves in the Western Hemisphere and could yield as much as 20 times as our natural current output of natural gas. You might think that such a large energy reserve seems too good to be true, and perhaps it is. It gets its name from a town on New York’s southern tier where there the shale formation juts out above the ground. The region’s energy richness has been known for decades. But extracting the natural gas from the pores in the shale in a way that would be cost effective and efficient has always been a problem.

Hydraulic Fracturing (or hydrofracking) was determined to be an efficient way of extracting the methane gas from the shale. The process is not new, it has been used in the oil industry for more than 60 years. Only in the past several years, with the rising cost of fossil fuels, has it been determined by the energy industry to be cost effective.

Hydrofracking removes fossil fuels from shale by pumping a pressurized cocktail of toxic liquids, diesel fuel and water, into the shale to fracture the rock, which would fracture the rock formations and release the fossil fuel, in this case natural gas. These fractures are then maintained after the injection by introducing materials such as sand, ceramic, or other particulates, that prevent the fractures from closing when the fluid injection is stopped. The water, diesel, and other chemicals that is left over is stored in pools, sometimes unlined, above the surface until it is hauled away for treatment or disposal.

Some landowners in the Marcellus Shale area are experiencing a modern day gold rush. Energy-industry representatives are paying princely sums, rumored to be as high as eight figures in some cases, to obtain drilling rights beneath private property. Others are worried about their wells, homes, farmland, and livelihoods.

Environmentalists are warning that hydrofracking is not only bad for the region, it can cause a catastrophe in New York as great, if not greater, than the ongoing Gulf of Mexico oil spill. They’ve presented evidence that it can provoke earthquakes and above-ground explosions, and that it can pollute our groundwater and create dry beds out of our streams, ponds, and rivers, which are used to supply resources for the hydrofracking process.

In Pennsylvania, where hydrofracking has been taking place in the Marcellus Shale, wells have been ruined, tainted with salt, benzene, and other toxic and volatile chemicals. There is evidence that these compounds have also entered into nearby streams, not only affecting fish, but nearby farms that use this water for irrigation.

The problems with hydrofracking in have been outlined in the documentary Gasland, which is currently playing on the premium cable network HBO. The most famous segment of the film shows a resident near a hydrofracking well setting his methane-infused tap water on fire in his kitchen.

Environmentalists point to evidence from hydrofracking regions in Wyoming and Colorado of people and wildlife being made sick from the process. Diseases such as rare adrenal tumors and cancers are attributed to the extremely toxic compound ‘€œ2-BE’€ that’s used in the process. There is no list of the chemicals used in hydrofracking, but clean-up sites left in the wake of the process have shown excess levels of toxins such as hydrochloric acid, benzene, toulene, and xylene (the last three toxins are commonly found in diesel fuel).

Why has the list of chemicals used in hydrofracking kept secret? Perhaps it had to do with a conflict of interest between the Bush Administration and the energy corporations, specifically Halliburton.

In 2005, the energy industry was exempted from many clean water protections by the Bush Administration. As part of Vice President Dick Cheney’s infamous and secretive ‘€œEnergy Task Force’€ in 2001, the captains of the energy industry and the administration touted hydrofracking as the future of fossil-fuel extraction, while redacting any evidence of human health hazards caused by the process. Halliburton, the company that pioneered and continues to develop and utilize hydrofracking, benefited greatly from the Bush Administration’s deference to the energy industry. Thus, the lack of clean water provisions in regard to energy development are known as the ‘€œHalliburton Loophole.’€

Vice President Cheney, if you need be reminded, was the CEO of Halliburton prior to becoming Vice President. He continued to be paid millions a year in deferred compensation from his vested financial interests in the corporation while serving in the Bush Administration.

Where does New York stand on hydrofracking? Right now, industry-supported State laws are in effect to disencumber hydrofracking in the Marcellus Shale and New York’s Department of Environmental Conservation has been busy stamping permits for drilling. But the DEC might be moving the process along too quickly: Instead of studying the environmental impacts of each individual well (which is typically needed under State law) the DEC has opted to hastily get through this process by only gauging the collective impact of the hydraulic fracturing process. Such generic evaluations are similar to the type of loose regulation used in deep water drilling in the Gulf of Mexico. These evaluations can also be easily disputed by the legal departments of large energy interests. In effect, New York’s DEC has chosen to marginalize its impact as the lead regulatory agency and seems more than happy to perform a mediocre job of protecting our state’s environment.

But local governments are stepping up and taking action and there is particular concern in this region. While Rockland County is outside of the Marcellus shale, it is only a short 70 miles from its eastern boundary and our natural water systems are directly affected.

Rockland County may take action soon in calling on Governor Paterson to impose a moritorium on hydrofracking. The County Legislature’s Environmental committee has recently passed a resolution calling for this. County legislator Connie Coker, who chairs the committee is hopeful that this resolution will be passed by the full legislature after its referred to them in a meeting on July 6.

“This procedure presents many environmental, human and wildlife health concerns,’€ said Legislator Coker [‘€¦] the prime sponsor of the resolution. ‘€œThere is the potential to contaminate groundwater, the surrounding landscape and the quality of air. What happens to all that solid material that is no longer just innocent sand, but toxic waste? This resolution asks the Governor to impose a moratorium and to withdraw the flawed impact statement until the results of on-going studies are made available, studied and concluded. I believe it would be viewed as a responsible and prudent action on his part.”

Clarkstown Town Clerk, David Carlucci, who is running for State Senate in the 38th District, which includes Rockland County and parts of Orange County, is also calling for a moratorium, and says that in many respects hydrofracking is New York’s equivalent to the Gulf of Mexico’s deep water oil drilling process and must be treated with similar seriousness. A recent press release form his campaign makes some lucid points about further reviewing the hydrofracking process:

It is my belief that we do not know enough about either side of this issue to allow widespread hydro-fracking in the Marcellus Shale and the Utica Shale formations to begin. We need to thoroughly investigate and understand reports of ground water and nearby stream contamination as well as the health impact to local residents before we jump into this process, or we may end up with an environmental disaster on our hands. Such a disaster would make any economic gain offered by the gas companies seem small by comparison.

Rockland County Executive C. Scott Vanderhoef, who is running against Carlucci for the open Senate seat, has worked as an environmental attorney in the past. Disappointingly, he has not issued a statement concerning the Marcellus Shale in either his capacity as the advocate for the county, nor as a possible future State Senator, which may have to make decisions about hydrofracking going forward.

There is bigger concern in New York City. Its source of drinking water is in the Catskill watershed, some of it within the Marcellus Shale. New York is one of the few municipalities that gets its water untreated from its reserviors. Contamination of New York City’s water supply would be a man-made disaster of monumental proportions and affect the health of more than 8 million people.

Until we get some answers and perhaps some alternatives to the chemicals and processes used in hydrofracking, residents of Rockland and Orange Counties need to back resolutions to call for a moratorium of this process in New York State.

This article is based on a similar piece written for the Left of the Hudson blog.

Advertisement. Scroll to continue reading.
In this article:Environmt/Green, Politics/Elections