Recently a question arose on these pages regarding the history of the Nyack Brook. The issue was whether the brook may have been used as  a geographic marker for African American slaves escaping North along the Underground Railroad.  There was a suggestion that the brook was man made and not available as a marker during the years that the UGRR functioned.

With our library somewhat inaccessible it took a little extra searching to find the following. 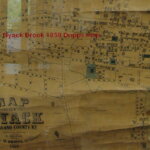 Two maps were reviewed, one dated 1854 and one 1859. The ‘Dripps’ map and the ‘O’Connor’ map respectively, which are on display at the Rockland County archives center. In both cases the Nyack Brook appears to be shown. The period of the 1850’s was the peak period for the UGRR.

Click on the images to the left to enlarge each map. If closer examination by younger eyes reaches a different conclusion, please let me know.

Joseph Mitlof is founder of the Historic Underground Railroad Society.

In this article:Nyack History, Rockland County