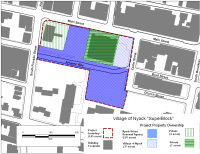 by the Village Board of Nyack

There has long been a sentiment among many in the village that these spaces are both unattractive and tremendously underutilized. This step forward will help establish whether redevelopment of this land is of benefit to the village and, in doing so, will hopefully send us on a path that will include new residential and retail opportunities, more tax rateables, a space that might include arts offerings, additional attractive public space and parking solutions.

The next and exciting step in this process is for the community to work hard and as a whole to determine the appropriate scale, mix of uses and an accurate sense of the financing to create a plan the village afford a plan which doesn’t put taxpayers at risk. This step is officially called a feasibility study.

The Village of Nyack has taken the lead in this process following the impressive commitment over the last two years by the Board of Riverspace to maintain the option on the Helen Hayes building and the M&T bank. They have continued efforts to encourage improvement of the Superblock portion in the heart of our downtown, even after the theater was forced to close its doors because of financial constraints. A member of the Riverspace Board, local Rosie O’Donnell, has agreed to finance the feasibility study. The village has issued a request for proposals (see RFP and supporting materials) for those interested in being chosen to develop the feasibility study.

Until the 1960s, the Superblock was part of Nyack’s downtown which was mixed use with housing and retail. The 1960s and 70s brought the urban renewal program nationwide, with the intention of removing “blight” and accommodating the automobile by adding parking. As happened across the country, the urban renewal program lost its federal funding before the project was completed, so what is now the Superblock has been left unfinished. No major investment has occurred since that time.

Part of the urban renewal project that did  get redeveloped was the Helen Hayes theater, which struggled financially as time went on.  Ultimately, Riverspace took over the theater in 2006, and has since been promoting the idea of redeveloping what is now known as the Superblock with performing arts as the anchor use. Riverspace secured an option on the theater property and the M&T bank property. In response to the recommendations made in the white paper published by the Mayor’s Committee on the Redevelopment of the Superblock, on April 23, 2009, the Village Board passed a resolution which stated its determination that redeveloping the Superblock is in the best interest of the village.

In order to help determine the next steps in the process, the Village of Nyack implemented another recommendation of the white paper and set up a Citizen’s Committee to examine possible uses and configurations for the possible redevelopment project. After an extraordinary amount of research and discussion, the Citizen’s Committee made a number of findings and recommendations in August 2009. Significantly, the committee found that a feasibility study—a professional examination of the site and which combination of uses would best meet the needs of the Village and comport with the Comprehensive Master Plan—was a mandatory first step in any redevelopment that may occur on the Superblock.

The Village Board agreed with this finding and formulated and published a Request For Proposals (RFP). On February 25, 2010, The trustees approved the RFP, and set March 29 as the deadline for proposals. The Village Board will then review the proposals and intends to select a consultant on April 22.

The feasibility study is an opportunity for the community to engage in a public process to determine exactly what is the best mix of uses for the site. In the process of evaluating the options, there will be an analysis to determine the financial feasibility of the alternatives and their environmental impact.

The feasibility studies will have three main components:

Nyack is moving ahead as expeditiously as possible, as well as giving the community ample opportunity to be part of the process and conducting financial due diligence to minimize any risk to Village tax payers.

A review of the project time line: