A collective “what the heck?” was echoed throughout Orangetown yesterday as the latest mailer sent by Republican/Conservative/Independence Party candidates Paul Whalen, Denis Troy, and Tom Diviny arrived. A highlighted paragraph in the center of the flyer contained this curious and intolerant statement: “To make matters even worse, the current administration tried to sneak through a workforce housing law that had the potential to increase multi-family housing and entity in the town.”

“Entity?” What do they mean by that? Did they leave a word out before it? This glaring editing error speaks volumes.

What’s obviously missing is the word that was supposed to come before “entity.”

It appears someone decided to remove a clause at the last minute, but one word was unwittingly left in. So, what kind of entity is it that scares Messrs. Whalen, Troy, and Diviny? Considering the anti-Semitic and racially charged rants by their xenophobic supporters at the now infamous Sept. 16 Orangetown Town Board Meeting Hatepalooza, I wonder. The meeting concerned workforce housing and was misrepresented as ‘affordable housing’ by the trio. I could very well be that one of the flyer’s co-authors wanted to spice up the text with some of the code words well used at that meeting and was overruled. 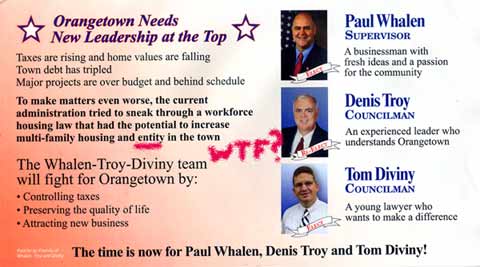 A. “an outside entity”
B. “an urban entity”
C. “an undesirable entity”
D. “an unwelcome entity”
E. insert your theory in the comments section below