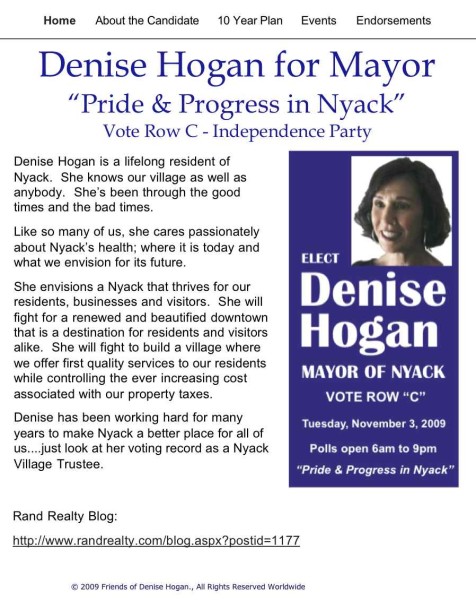 On her Web site, Hogan encourages voters to “Vote Row C – Independence Party,” a clear indicator of a line vote. I think it is unfortunate, considering that Thom Kleiner, Suzanne Barclay, Dan Salmon, Marie Manning and other good Democrats are all on Row A. Also, the Independence Party is running a candidate for Village Trustee, Maureen M. Dougher, against Jen Laird-White and Doug Foster.

I’m going to assume the “Vote Row C” on Hogan’s Web site is a mistake and I hope she takes it down and clearly informs Nyack, Orangetown, and Rockland voters that she is not endorsing the candidacies of Vanderhoef, Whalen, Diviny, Troy, and Dougher on the Independence Party line and makes it clear who she is endorsing.

This comes at a most unfortunate time for Hogan, as Vanderhoef’s slime patrol, Madden Communications & Marketing, teamed up with Troy, Whalen, and Diviny last month to misrepresent an innocuous workforce housing plan presented before the Orangetown Town Board. These miscreants robocalled conservative constituents and insisted that workforce housing was instead, “affordable” or “low-income” housing. This triggered fear and loathing at a Town Board meeting where hundreds of teabagger types showed up and many shouted crude anti-semitic and racially-charged rhetoric while three of these Independence Party candidates encouraged them. The whole event as staged by Troy et. al as a Karl Rove-style political dirty trick to embarrass Kleiner and the Democratic Orangetown Council members. Luckily, the race-baiting backfired.

I, for one, would not be caught dead with my name on a political slate with the likes of Vanderhoef, Diviny, Troy, and Whalen. I encourage Hogan to at least publicly denounce them.

UPDATE: Denise Hogan has scrubbed her Web site. It now says “Vote for Denise on Row ‘C’ or ‘€œF’ on Election Day.” This is an admission by her campaign that she inadvertently endorsed the entire Independence Party line. I am now looking forward to a public letter from Denise Hogan to voters in Nyack, Orangetown, and Rockland repudiating the race-baiting tactics used by Troy, Whalen, et. al. and an endorsement of other local Democratic candidates. Stay tuned!