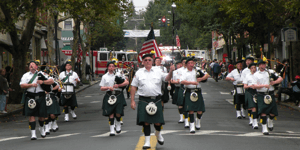 NYACK ‘€“ When the first members of Orangetown Fire Co. No. 1 were appointed by the Orangetown Town Board on Oct. 4, 1834, Andrew Jackson was president of the United States and rising young Illinois lawyer Abraham Lincoln was just 25 years old.

Presidents have come and gone, institutions have risen and collapsed, many fortunes have been made and lost. But after 175 years of change, Orangetown Fire Co. No. 1 in South Nyack remains a thriving group of volunteers dedicated to protecting the lives and homes of their neighbors.

The members of the fire company on Depot Place on Saturday celebrated their history by hosting an anniversary parade that brought together fellow members of the Nyack Fire Department and hundreds of other volunteers from more than 30 other volunteer fire departments. While there are many fire parades in Rockland County and the HudsonValley area every year, Nyack firefighters said the history behind this anniversary made the parade a very special event for them.

Although clouds loomed and rained threatened as the 2 p.m. parade stepped off, skies cleared enough to brighten the streets of Nyack for the two-hour-long event. Spectators lined the parade route from Midland Avenue in Upper Nyack, through downtown Nyack along Main Street and Broadway and then on into South Nyack.

Leading the parade were Nyack Fire Chief Robert Booth, an Orangetown Fire Co. No. 1 member, and longtime Orangetown Fire Co. No. 1 member Thomas ‘€œFarmer’€ Alworth Sr., who was named grand marshal for the historic event. A reviewing stand set up on Broadway in front of the Nyack Center served as the focal point for firefighters who took part in the parade, including volunteers from throughout Rockland County, Westchester, Orange and upstate New York. Fire units were also escorted by bands that included the Iona College Pipers, the Tappan Zee Bridgemen, the Emerald Society Pipe Band, the Tarrytown VFW. Post 1939 Band and the Civil War Troopers among others.

Although fire parades are not new to Nyack, local firefighters said the line up of bands, color guards and firefighters was one of the largest gatherings in recent memory for the Rockland area.

When the marching was done and the reviewing stand packed up, the anniversary celebration was far from over. Nyack Fire Department companies hosted visiting firefighters for parties at local firehouses, which included plenty of food and music. The Orangetown Fire Co. No. 1 firehouse hosted hundreds of people under tents ‘€“ with a bandstand set up for live music in front of the firehouse. A similar set up could be seen at the Empire Hook and Ladder Co. No. 1 firehouse in Upper Nyack, creating a festival atmosphere on North Broadway.

The day culminated Saturday night at Orangetown Fire Co. No. 1, where representatives from most of the units in the parade converged to hear Booth thank them for their support and to hand out coveted trophies to honor the best bands, marchers and equipment that came out for the parade.

On Saturday night, trophies were handed out to the best units that participated in the parade.  The “Best Overall” award went to Slater Chemical in Glenham, NY with Rescue H & L Haverstraw receiving top honors for “Best Overall Apparatus.” The top woman’s honors went to Nanuet for “Best Overall Ladies.” For a complete list of winners, see the Rockland Review.