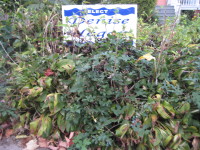 Nyack can’t afford another four years of yet another compliant executive in the Mayors office. It’s very simple really, ask yourself does it look better or worse around Nyack than it did eight years ago?  As he did throughout his tenure Shields and by extension Hogan will point fingers and box the compass with excuses and blame and try and drown the  issues in KoolAide.

For eight years Mayor Shields was too lazy to fish and now he wants to pass his legacy of inept and feckless leadership on to a new generation.

Nothing has happened with the streetscape except we’ve lost a few more of our signature stores. The lighting initiative stalled out on South Broadway and the Marina is a hole in the River. To my knowledge there still does not exist any sort of capital expenditure plan to prioritize the projects we are looking at so we are now left to simply try and do triage and stop the hemorrhaging. (Oh right we need another study to ignore first).

The streets have never looked worse than they do today and still our taxes are through the roof. Our streets are not safe, rents are not coming down and the empty stores remain empty stores. These are the facts Denise’s ‘€œnot too swift boaters’€ don’t want us to talk about while they rant about endorsements. My best advice is to not make eye contact with any of them.

Denise Hogan and her ethically challenged supporters are desperately trying to lay claim to the office with fearful and misleading rhetoric that does nothing except balkanize the conversation. While she gives lip service to community support for everyone, behind the scenes she bangs the drum with apartheid rhetoric setting neighbor against neighbor. It’s nothing less than bizarre that Denise needs the support  (and money) from Pearl River and Suffern to win an election in Nyack.

Enough already. Enough government by a bunch of college kids on the loose with alcohol and car keys (and my money). Enough of Shield’s ‘€œmobocracy’€ and enough of his ‘€œlaisez bon temps rollez’€; its time to get to work.

It’s time for the grownups to take over and make some responsible decisions and start digging us out of instead of digging us deeper into the weeds.