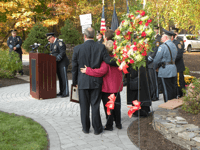 October 20, 1981 is a date which will live in infamy in Rockland County.

The murders took place at the Exit 11 entrance of the New York State Thruway, where Nyack police had set up a roadblock and the fatal volley of gunfire ensued.  Nyack Police Sargent Peter Kennan was also wounded.

The Rockland County Historical Society also unveiled a new marker on the newly landscaped grounds that declares these grounds on Mountainview as a landmark and briefly recounts the events of that day and the subsequent trials. O’Grady and Brown were also awarded Medals of Honor posthumously by the American Federation of Police. Michael Paige, who is Peter Paige’s son, received its Patriot Medal.