‘€œHitler to Obama: I love you 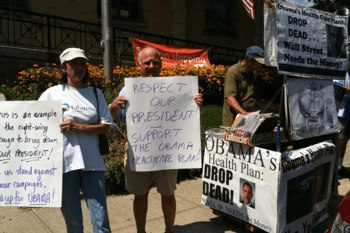 These were among the messages that two Lyndon Larouche acolytes were proclaiming to anyone who would look and listen in front of the Nyack Post Office today.

Like me, many people were profoundly offended by these offensive messages, in particular the photograph of President Obama with a Hitler-mustache. ‘€œAs an American ‘€“ and as a Jewish-American ‘€“ I find this picture revolting,’€ one villager told me.

Dozens of people stopped in their tracks to dispute the hogwash ‘€“ for example, ‘€œObama wants to end Medicare’€ ‘€“ that was being peddled.

Michele and Vernon Hamilton of South Nyack were walking by the post office, saw the Larouche propaganda, and decided that supporters of the Obama plan needed to organize a counter-demonstration, or ‘€œtruth squad,’€ if you will.

‘€œWe had to take a stand against the hateful message against our President,’€ Michele, a public school teacher in the Bronx told me. ‘€œI support the president’s healthcare plan. As a person who deals with children, we need the change that Obama is bringing to our country, especially in education, healthcare, and the economy.’€

So starting at about 12:00, Michele and Vernon ‘€“ later joined by as many as 20 of us ‘€“ button-holed people in front of the post office to dispute the lies about the Obama plan that are being spread by Larouche, Rush Limbaugh, Sean Hannity, Glenn Beck, and the rest of the right-wing commentariat.

Numerous people, in dozens of cars, honked their horns at us in support of our message, gave us the thumbs up, or shouted their encouragement. Their support fortified our resolve to stand and deliver, even under the blazing sun and drenching humidity.

Salahudin Rahim made copies of a very helpful, long memo from presidential counselor David Axelrod refuting the right-wing lies on a point-by-point basis. Several of us carried our own home-made signs.

Three Orangetown police cars were dispatched to the scene as a precautionary measure, but although the discussions between the two groups became heated at times, there was no need for police action, at least by the time I left, at around 2:45.