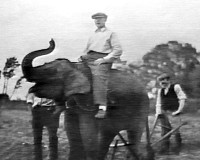 The elephant in the Amazing Grace Circus parade may have been quite a spectacle, but elephants were commonly paraded in the village some 80 years ago. Dr. Pierre Arnold Bernard, a yogi, businessman, and founder of the The Mystic Order of the Tantriks of India (later the Clarkstown Country Club) in South Nyack, once rode his elephants downtown regularly.

“The Omnipotent Oom” as the controversial Bernard referred to himself, maintained an elaborate menagerie of animals on his property, including nine tigers, a pride of lions, a llama, a chimpanzee, and as many as nine elephants that were part of an annual circus staged by the order.

The most famous of these elephants was Old Mom, a two-ton Asian that was legendary in Nyack. Bernard was known to ride Old Mom down from his property (which was located at the current site of Nyack College) to Main St. and conduct business.

me. Old Mom also helped in the construction of a sports complex that Bernard built on Waldron Ave. to host his minor-league baseball team and boxing matches. Old Mom moved rocks and heavy construction materials at the site.

Old Mom died in 1934 at 92 years of age. Her burial caused quite a controversy among Nyack’s residents. Here’s an account from “The Great Fuss and Fume Over the Omnipotent Oom” an article that appeared in True magazine in January 1965:

Oom hitched up the other elephants and they performed the doleful task of dragging the huge carcass to the lower edge of the sloping Tantrik property. Then workmen on the estate dug a grave and Old Mom was pulled in and covered over.

Some weeks went by before word of the event reached the village, and by the time it did the story had undergone considerable embroidery. Old Mom, it was reported, had been buried smack in the middle of an underground stream feeding Nyack’s water supply and there was nothing on earth more poisonous than a dead elephant!

A great crowd of angry Nyackians armed themselves with clubs and whatever other weapons came to hand and marched for the Tantrik preserve. A newspaperman phoned Oom of their approach and he strolled down alone to meet the angry throng. His gaze is what halted them momentarily but it was what he told them that permanently destroyed their resolve and cleared the way for future happenings.

“You guys are all wrong,” Oom explained, pointing to a mound of earth. “There’s Old Mom’s grave and the towns reservoir is far up the hill, as surely you must know. Which way does water run? Any idiot who believes it climbs has my permission to dig up the elephant, but I won’t be responsible for her odor!” Then Oom laughed–something he rarely did–and soon the crowd started laughing with him. Somebody read aloud the line cut in the pediment above Oom’s gate about this being a place where a fool “might wear a thinking cap” and suggested that it certainly seemed applicable to the present situation. In the end the Nyackians who had come to lay siege to the Tantrik colony did an about-face and dispersed in peaceable frame of mind.

Oom’s other elephants’€”the most famous being Babe, Buddha, and Juno’€”were booked as independent acts until the beginning of World War II. Soon after the war started, Oom and playwright Charles MacArthur staged circuses to benefit British war relief efforts. After the US entered the war, Oom divested himself of much of his wealth, which included  his menagerie. Oom died in 1955.

Photographs: Bernard astride one of his many elephants (top).  The elephants on a regular stroll over the hill through Central Nyack (middle). Both still frames from the documentary “Before the Bridge” courtesy of the filmmaker Steve Bretschneider.