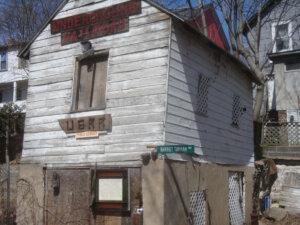 The Port Authority is building an $8.7 billion underground railroad for commuters in the Hudson with $3 billion in federal stimulus dollars. Nyack’s Historic UnderGround Railroad Society (HUGRS) is asking President Obama to name the new link the “Harriet Tubman Memorial Tunnel” in honor of the African American activist who made 13 missions to rescue over seventy slaves using the network of antislavery activists and safe houses known as the Underground Railroad.

The UnderGround Railroad (UGRR) is celebrated in the Nyack area in an exhibit housed at a mid-19th century barn in downtown Nyack. The display includes old tools and hardware, an explanation of the UGRR, a mini-sculpture (maquette) of Harriet Tubman and other UGRR related items. Designed for a grammar school level audience, the exhibit includes a secret escape tunnel, a ‘funnel view’ of the buried Nyack Brook and an audio of the African American slave anthem, “Follow the Drinking Gourd.”