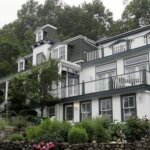 Baldwin bought the house in 1997 for about $500k, and has been trying to sell it for years for $3.4 million, which didn’t find any takers even in the hot 2006 market.  Apparently the property was threatened with foreclosure even back in 2006.  Why they didn’t drop the price a bit to sell it (at a nice profit) is not clear.

I wasn’t aware of the proceeding until a TV crew from Channel 12 news was walking around downtown Nyack asking for reactions to the event.  It was tough going since few people wanted to comment.