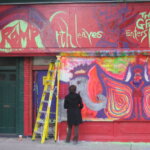 The Romp Store, the controversial storefront which replaced the old Ben Franklin Bookshop, got it’s day in architectural court Wednesday night. The Nyack ARB (Architectural Review Board) was asked to review owner Carol McIlmurray’s request to change the storefront facade. Ms McIlmurray and some associates have painted and repainted the store window day and night  in the last 60 days with the intention of removing the pane and selling it as a standalone piece of art.

Art withstanding, these changes are a violation of local ordinances, and pose a fire risk, since there is no way to see inside the store.  Ms McIlmurray has been given verbal and written notice to stop “six or seven times” by Village officials. Additionally, neighbors say the paint left on the sidewalk has been tracked into adjacent stores costing several hundred dollars to have professionally cleaned.

McIlmurray claims she had permission from the building department to paint the storefront saying it was temporary.

ARB Chairman Eileen Kuster-Collins dictated seven points McIlmurray needed to follow to be in compliance. These include:

The color choices and the plan will be available for public review in the Nyack Building Department.

Although anxious to “put this incident behind her,” McIlmurray was reluctant to restore the facade to it’s original dark green. “I would have never picked that color for my business,” she said. McIlmurray says she prefers an off-white color and expressed doubts about the historic significance of the building and the need to restore it to it’s original look.

Members of the public and Village officials expressed their doubts about Ms. McIlmurray’s sincerity in adhering to these new guidelines after several weeks of cat-and-mouse games with building officials. “I’d tell her to stop, turn my back, and she started to paint again,” said Fred Viohl, a code enforcement officer for Nyack.

During the meeting, Viohl and McIlmurray had this telling exchange. “You were delivered a stop work order, ” said Viohl. “I was on a mission,” replied McIlmurray.