Riverspace Board members  John Forster and Katrina Hertzberg  write in the 4/23 Journal News that the time is now to chart Riverspace’s future. They eloquently restate the case that arts centers can’t support themselves on ticket sales alone and that performance venues like Riverspace add more to a community than dollars and cents. It’s true, as the authors say, that since its rebirth three years ago, Riverspace “has become an essential part of Rockland County’s cultural landscape.” Critics can harp on the lack of sell outs, but merchants are grateful for the increased traffic and fearful of what might happen if the space closes. 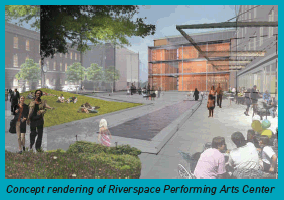 If you are new to the debate, Forster and Hertzberg offer an updated and concise view of the plan to create a four-acre “superblock” in downtown Nyack. According to the plan, commercial, retail and residential space will generate income to cover operating expenses at the arts center. It’s a bold idea that promises to promote the arts, the merchants and the village.

But it’s troubling that longtime Nyack residents — often ardent supporters of the arts — are skeptical about the  finances for Riverspace Downtown. Although they want it to succeed, they are not convinced that it will translate into rentals and increased revenues. Skeptics say that if any part of the formula fails, Nyack taxpayers will be left with a darkened arts center, a failed commercial district — or both. And taxpayers will be left with increased costs for funding the construction of the reconfigured street plan

Although Riverspace may have the answers, today’s piece tells the same story with an extra note of desperation. If RS can’t raise $500,000 by June, the vision and next year’s season are threatened.

It’s a serious situation. But it hasn’t addressed the initial “show me the money” question, no doubt exacerbated by today’s difficult financial environment.

Riverspace offers a vision to transform Nyack architecturally, artistically and financially. The authors are right: the time is now. But a different action is required than past attempts to talk about the arts anchored superblock. Riverspace needs to reach out to skeptical voices in the community and walk them through the financial scenario. Share best- and worst-case scenarios and once and for all get more Nyack’ opinion leaders on board.

NyackNewsAndViews can facilitate this discussion in person or online. Skeptics: send us your questions. Riverspace: we’ll forward what we receive and publish what you say.

If there are good answers to be had, let’s share them now and move forward so we do not miss the opportunity to create a great arts center for our town. And if the Riverspace finances are a dream which won’t hold up to scrutiny, it’s something we should know about now.