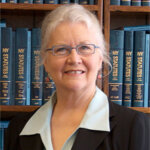 Connie Coker is a County Legislator, representing South Nyack, the Rivertowns south to New Jersey, Blauvelt and most of Orangeburg.

She moved to South Nyack in 1985 with two small children.  She worked with People to People, a hunger program at the County.  She is a nurse, and started working in the clinics at the Westchester Medical Center, and then decided to become a midwife.  She started a practice in 1997 in South Nyack as a midwife.

In 2006, she decided to get involved with grassroots politics, focusing on access to health care and the environment.  A month later, she got a call from the county legislator, who was going to resign from the legislature, and wanted to appoint Connie.

It was a competitive process, by the legislative district Democratic committee,  and she made it through and was selected to be the Democratic candidate and appointed to fill the vacancy in Spring of 2007.  In the fall of 2007 she ran a tough campaign for re-election and won.

One thing she appreciates is to have a voice in the process, and bring her commitment for babies and families into policy making.  She has learned elected officials are human beings that also pay taxes and live in our committees.

She has learned that the political process can be a positive thing in the name of good government.  It was a lot more fun, when there was a sense that there was money.  Now they are forced to make some extremely hard choices.  She comes down on the Health Department and Social Services.  But we need public safety and other services.

Connie feels it is important to make the environment a priority.   She is working with Andy Stewart of Keep Rockland Beautiful and Peggy Kurtz of the Sierra Club on this issue.  The County staff is looking at options for an important issue of hers, trying to get plastic bags out of the environment. She is looking into a program that would work with the store owners to promote re-usable bags.