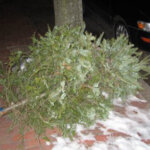 A lot of people are buying Christmas trees, which they will have for a few weeks in the house, and then they’ll put them on the curb and they will disappear.  Most people don’t think about what happens to the tree in the “after life”.  In fact, few think about all the other items that constitute the waste stream.

Where will that tree go?  Victor Overton, the Village’s Superintendent of Maintenance, says they go to the composting facility near the mall.  You may have smelled the sweet odors from that facility while parking at the mall or driving by the Rte. 59/303 intersection (see Journal News article on odor issues).

The facility has been recently (just a few weeks ago) taken over by the Rockland County Solid Waste Management Authority.  This is an effort by the Authority to take over local facilities so they can be run more efficiently.

So what happens to your tree?  Well it will get ground up and mulched and either composted or the mulch will be used as is.  Worry not, your tree will have a use after it has adorned your house, and won’t end up in the landfill.

Apparently,  some people don’t get rid of their trees right after the holidays.  Mr. Overton says that the Village picks up trees as late as May!