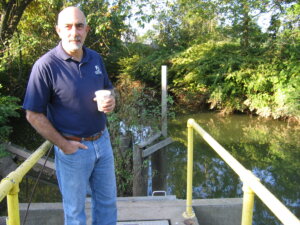 Michael Lovaglio at the water intake

Last week I met with Michael Lovaglio, the Superintendent of the Village’s water department. It was a very interesting experience, and a pleasure to meet Michael.

The short answer. If you are one of the 15,000 land owners that live in the Village of Nyack, South Nyack, in Central Nyack or the Hamlet of West Nyack, your water comes from the Hackensack River, just after it is released from the Lake DeForest reservoir. If you live anywhere else in Rockland County, except the Village of Spring Valley, your water comes from United Water.

The first thing I noticed is that its hard to find the water plant. And that is by design. After 9/11, part of the security plan is to keep the facility off any map.  It’s not like it will really stop a bad guy from finding it, and climbing over the security fence, and doing something bad, but there has to be a plan.

It is not without irony that I got lost and ended up at the United Water offices.  It was a great juxtaposition in the end.  It was very corporate, with a herd of employees all showing up at the same time at 8am.  There was a fleet of clean vans with the well-branded logo plastered on them.  They had no idea who Michael was or where Nyack’s water plant was.  I guess the security measures are pretty effective.

I called Michael and negotiated my way to the plant.  I’m not allowed to tell you where it is, but it is close to the mall, the largest customer.  I got there at 8am so I could see the plant while it was in operation.  The plant works overnight and in the morning to fill up the main 2.3 million gallon storage tank, which I’m also not allowed to say where it is.  Suffice it to say that the tank is in an elevated location, just west of Nyack.  From there, gravity does the work to get the water to our taps. There are two other tanks that serve specific sub-areas.  The hospital basically gets its own storage tank.

Ok, so the experience was VERY different than United Water.  Michael was not working for a large corporation.  He has worked 30 years for the Village, and born and raised in the community.  He manages a small team of municipal employees that he is proud of.  The facility is functional, his office is small and no frills, part of the fabric of concrete walls, water tanks and pumps.

The focus is to keep the facility operational, because if you do the math, there are only a couple days of drinking water for its service area in the storage tanks.  Don’t worry, if that happens, they can hook into United Water’s system.  Water operator’s are highly regulated.  They test every hour to make sure the water is safe. 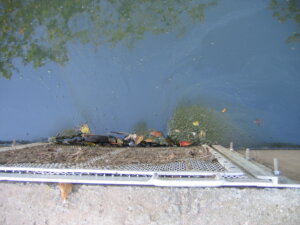 If you look at the intake, you might be a bit spooked by what you see.  The water does not seem clean.  It’s a brackish river with lots of material floating around.

But this is part of the process.  The water first is sprayed into the air, which isn’t intended as a pretty fountain, but to get out gases and heavy particulates.  It then begins the treatment process, first getting the particulates out, and then chlorinated to kill all the bad bacteria and viruses.  Once again, the water is tested frequently, and much of our water bill is spent on tests that the federal regulations require, but don’t pay for.

In the end, we get clean, safe water.  And every day Michael is responsible for our health.  He says that it definitely adds stress to his life, heading a 24/7/365 operation, but he loves his job.  At least he has a level of job security, because its not like we can say we don’t need water any more.

As far as future plans, there are no foreseeable problems with water supply or huge capital projects to worry about as a tax payer.  That can’t be said if you are part of United Water’s system.  They are running out of water, 80% of which comes from wells.  They have a plan which calls for building a de-salination plant, which will cost a LOT of money.  United Water rates are already higher than the Village’s, and that is going to get worse.  Reading the Wiki on United Water is interesting.  It was a local company that expanded and now serves 7 million people in the USA, and is currently owned by a French holding company.  The Big Brother of our future is likely going to be around water.