Nyack, May 7th — Bad things can bring good people together, demonstrated by the 100+ people who turned out for Wednesday’s community forum at the Nyack Center to talk about gang violence and youth issues.

It’s clear that the causes behind what happened in the park at Cedar Hill Avenue and Franklin Street on April 16th aren’t confined to the Village. What isn’t as clear is whether or not gangs were involved. 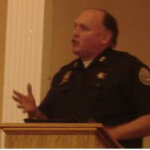 However, several Nyack residents vehemently rejected the April 16 event as gang-related. “We don’t have any gangs in Nyack,” said Nyack resident Mary Johnson. “That was just a small incident. We don’t have murder and crime like Spring Valley.” Johnny Daniels, a teenager living in Nyack Plaza echoed that sentiment. “I don’t see any gangs. I do see people hanging out. If we were white, people wouldn’t say this was about gangs — they would say it was just a little trouble.” Nyack resident Joanne Humphries-Saunders added, “Every kid of color is not a gang member.”

“We shouldn’t make statements about people if we don’t have all of the facts,” said Dr. Valencia Douglas, Nyack Public Schools superintendent. Douglas explained the school’s code of conduct and new security measures recently added by the district. Additionally, she said the schools need to balance enforcing the rules without driving teenagers away. “I refuse to come down so hard on the students and make them believe we don’t love them,” she said. “It is critical when students make mistakes they have a chance to correct them and come back into our schools.”

One contradiction emerged early in the evening. Law enforcement is sure that are gangs in Rockland County. However, it was also clear that many of the speakers were incensed by the use of the word “gangs” because it carries connotations that most of the people in the room didn’t understand.

Regardless of whether or not gangs were involved there was Trouble In Rivertown City on April 16. Here are some of the suggestions and observations offered by the speakers:

Humphries-Saunders offered a good summary with which most speakers would have agreed. “We need to take control of this situation. We need to be sincere. Nyack needs help.”